if you’re looking for our logo gallery, click here…but the stuff below is really rather interesting

Sometimes—maybe once in a lifetime—we get the chance to do something enjoyable and fun that we thought we’d never be able to do again, simply because technology had taken its place. It’s a golden opportunity to recapture a romance from the past. In this case, for me, it’s not golden; it’s black and white. And the romance is my love of lettering and typography: real hand lettering with pen and brush, and fine typography when wood and metal type were set by hand. That, combined with replicating the layouts and artistic styles of yesteryear, is what I never thought I’d do again…but as synchronicity between two old friends would have it, I am once again thriving at my passion.

We’re talking—er, we’re silent—about the era of filmmaking from the early 1900s, when cameras and projectors were cranked by hand, and when actors had no speaking lines. All the dialogue was printed or hand-lettered on title cards, called inter-titles, photographed and spliced into the film. The film titles and credits were most often elaborately hand-lettered with embellishments, but sometimes simply typeset, also photographed as still images.

Back to my black-and-white opportunity:

JOSEPH A. RINAUDO, whose name appears in the title card above (which is actually his business card, much smaller of course), has been my friend for nearly fifty years, since junior high (middle school). Back then he was collecting 16mm silent films and would put on shows for his friends. Today he researches, collects, restores and exhibits silent films (35mm these days) on a hand-crank projector, usually with live accompaniment of theater organ or piano, as itinerary shows to audiences far and wide, including the Academy of Motion Picture Arts and Sciences (in other words, the Oscar people). Joe is also consultant and provider of restored films to the Library of Congress.

Joe asked me a few years ago if I’d be interested in restoring the title cards for his films and create new ones when the originals are lost to time. Who knew two best friends would be so valuable to each other nearly fifty years after meeting in seventh grade—my restoring the missing parts to his films and he restoring my passion for lettering and typography? I have enjoyed rendering titles for Joe for several years now, and I even get to see them projected on the silver screen in silent comedies and dramas accompanied by the Mighty Wurlitzer. (Twice a year Joe brings his itinerant show to the Nethercutt Museum in Sylmar, California. A calender of events and details about the shows are on their website.)

Much of my work for these titles is cleaning up scanned images of the original negatives. Sometimes I have to “chop up” letters to replace parts of those which are badly deteriorated. When titles are missing entirely (usually due to splicing after splicing of these nearly hundred-year-old films) I have the most fun! Drawing upon my skill of hand lettering (which I did before computers could set a nice script or a modify a typestyle) and knowledge of period type styles, I create new title cards from scratch, based on existing footage and artistic styling of the era. Most of the lettering and effects I accomplish with Photoshop, but once in awhile I still need to use a real pen or brush with real ink to get just the right swing or flair.

You might be wondering, how is it possible that if all the scenes are intact on these films, just the titles and intertitles are missing? I wondered the same thing. Joe explains that much of the live action footage is indeed missing on these old films, but the remaining footage still carries the story. However, if a dialog or narrative intertitle is absent, the plot is hard to follow. So the new intertitles are inserted and the film seems complete, even with several live action frames missing. Most of the lettering I recreate for Joe is taken from the exact text in the films’ original manuscripts.

Joe Rinaudo is also an expert on the American Fotoplayer, one of which he fully restored and entertains his guests with, and another of which he has rebuilt and installed at the Academy (the Oscar people, remember?). What—you say you don’t know what a Fotoplayer is? Joe is playing one right now for you in his living room: Joe Rinaudo plays the Fotoplayer. After you hear this massive “one man band,” Joe will explain all the pedals, levers, switches, buttons, and pull cords (including a Klaxon horn). You’ll understand why there’s a wide berth between his house and his neighbors. Here’s Joe’s Fotoplayer page. 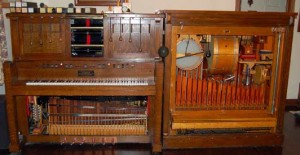 Here are some titles I’ve either cleaned up or created from scratch, replicating the originals, on a blank sheet of poster board (either Strathmore with ink or Photoshop with pixels) which were then photographed and inserted into the restored films:

[Not a valid template]

Joe Rinaudo chopped off the tip of his finger in a metal shear the day before his birthday, so  I created this “film title” as his birthday card. Hey, humor was crude back the early 1900’s.

See some old (but restored like new) glass lantern slides.